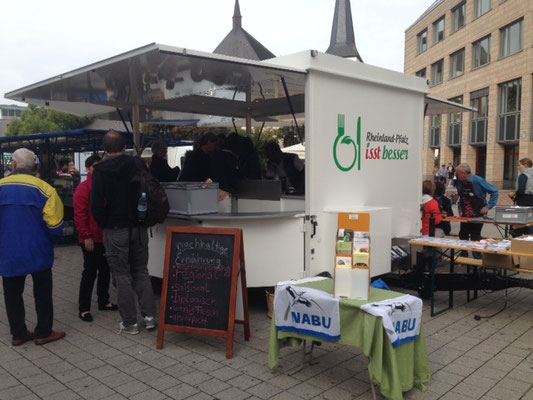 “Rheinland-Pfalz eats better” is the name of the regional campaign that aims to improve meals in schools and kindergartens. By encouraging ecological farming and plant protection, the project fits nicely into the bigger picture of sustainable nutrition. As well as throwing away less food, this includes purchasing “bio” and local products that don’t put anything unnatural back into the earth and which haven’t traveled around the whole world and ideally with as little packing as possible. Our food production should burden the environment as little as possible so that the needs of future generations are respected as well as those of the current growing population are met.

Part of the campaign features the kochbus (the cooking bus). On Friday morning the bus came to one of Trier’s main squares, where the NABU (Naturschutzbund – Nature and Biodiversity Conservation Union) invited a couple of dozen teachers from local kindergartens. The goal of the day was to facilitate an exchange between those who have already started gardening projects in schools and those who are motivated to do so. Several of the kindergartens have raised beds, where the children tend to the vegetables and later cook with them. Learning which herb is which, what goes well together, what they like and what they don’t like are skills they can take home with them.

The day coincided with the weekly market, which allowed the market-goers to take a look and try some of our freshly made gnocchi, onion chutney and apple pancakes and the kind Mr. Jakob Schwarz from the stand next door gave us fresh watermelon and tomatoes from his garden.