A few dozen people crowd around the front of a flixbus that pulled into the bus station in Frankfurt. I lingered at the back of the group feeling no haste to abandon the fresh air. My turn came to board and before the driver had the chance to direct me upstairs as he had done for the other Paris-bound travellers, I indicated the empty lower deck, luxurious with space. He had no quarm with this suggestion and I soon found a cosy spot by the window. The routine unfolded in a similar fashion to my other night bound endeavours. Layers on, including fluffy socks and an extra hoody. It’s warm now but at four in the morning tired bodies feel the cold.

We are scheduled to arrive in Paris just before seven and I can picture Bercy already. Will it be as pitch black as pictured in my mind? When I lived in Paris I became well acquainted with the bus station and often found myself wandering along the Seine in wait for an all-nighter to Freiburg, Bordeaux, Brussels, Amsterdam or London.

On most occasions I would arrive in the city of choice at, or shortly before, daybreak. My first step, a cafe or somewhere to wake up with warmth. In Brussels it had been a bar that was about to close after a long friday night. Two smoked and drank at the bar and I drank a tea in the corner. Once light came, I was able to crawl into bed with friends from home and watch In Bruges and drink coffee.

I’ve become better prepared over the years since that first January journey that had me roaming the streets of Brussels, empty but for one or two late-night wanderers, quite capable of scaring me out of any wits I still had about me. Now I travel with adequate snacks and drinks, a thermoscan of tea, podcasts and music at the ready.

This evening’s embarkement towards Paris is not the end goal. As the sun rises I’ll stroll along the rive gauche towards Montparnasse from where I’ll take a train to La Rochelle. A dear companion of mine from my first year in Trier lives there and she is the inspiration for my visit. On Sunday evening I’ll take the night bus to Paris and have all of Monday to explore and walk the streets that were my home for a year, several years ago.

The first yawns are happening and I’m ready to have my first of many mini naps. Yes, we’ll be on motorways for most of the journey but I’m excited to see how the landscape changes, if I can see anything at all.

I managed to sleep most of the journey having had the delight of two seats to myself. The lower deck hosted about eight women for the night, each of us with our own private corner.

I exited the bus and began the northwesterly walk to Montparnasse. This morning I feel half flaneuse, taking my sweet time to ramble through the streets and boulevards, and half on a mission, aware of the time I have. I’ve been here, at the bus station just before the outskirts of Paris, many times. The first landmark I recognise, other than the bus station itself, is a cafe I sat in with Odile in July 2016. A good friend, she helped me move out of my flat in avenue secrétan and we lugged my bags to Bercy where we awaited the bus to London. Next it’s Chez Gladines, a Basque restaurant to which I insisted taking the majority of my visitors. The markets are setting up and there are stands being filled with vegetables, fish, cheese and meat.

Some of the Parisian boulevards are carved down the middle with a strip of what initially looks like no man’s land. On the contrary, most of these paths feature encampments and creative ideas for homes plus the inhabitants themselves. A bandstand looks abandoned and I wonder when it last heard music. Now it’s a home and someone lies on the vent that allows the heat from the metro to rise up and warm their sleeping bag.

It’s still dark, the sun should rise in an hour. Cafes and restaurants are already open and at the bar there are people in suits and brightly coloured working wear leaning against different ends of the bar, sipping their coffee.

I wonder when it’ll start getting light and disorientated, where the brightness will come from. I crain my neck up at the dark sky for a clue. The avenues are long and host a gradual incline as they slope away from the Seine. Lights in the distance, seemingly clumped together, could be street lights blended into a mesh or fairy lights on the awning of a bar.

I look up at the houses around me, each one with its own tree in front, hardly hiding the house at all or allowing it privacy. At any one point when I look up, there is someone in a window. A light goes on, drapes pull back, shutters roll up, a man smokes and leans the hard side of his forearms on the window ledge, his palms looking down to the concrete below.

All of a sudden the street lights go out as if someone just flipped a switch and the avenue in front of me seems dark though I’m now aware of the light streaming from behind. Many people are walking along the boulevard and sporadically they turn off to enter a building, ring a bell or peer into the window of a boulangerie. A herd of a dozen school children scoot past me on two wheels each and they carry a noisy energy with them.

I arrive at Montparnasse train station and before long we’re travelling backwards, southwards towards the Atlantic. The landscape is flat apart from wind turbines and electricity pylons and it’s comfortable to be in here. 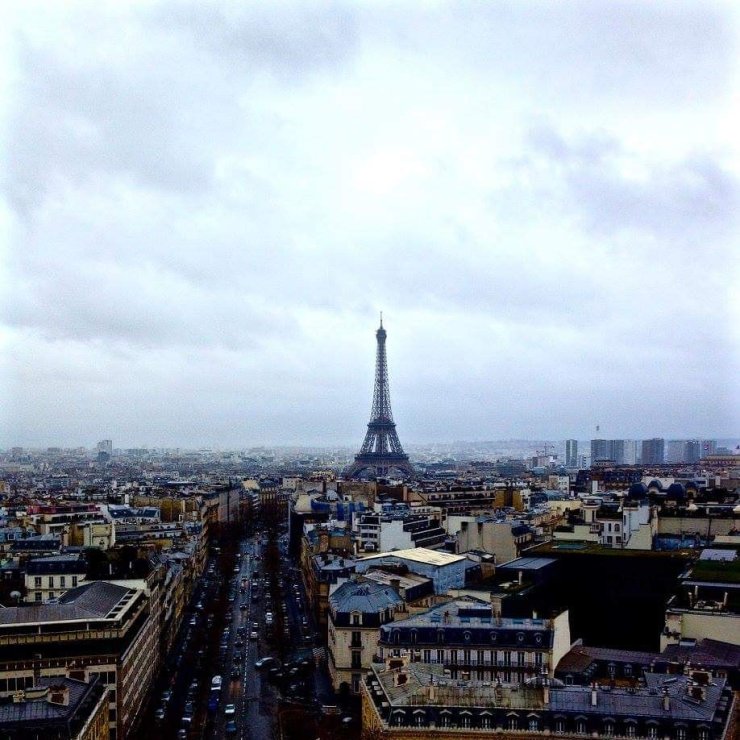